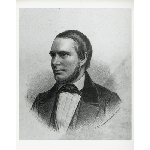 Nathaniel Bradstreet Shurtleff served as Boston's nineteenth mayor, from 1868 to 1870. Shurtleff is more known for his antiquarian labors than for his work as mayor, although during his mayoralty many new streets and much territory were added to Boston. He was born in Boston on June 29, 1810. His father, Benjamin Shurtleff, was a physician. He was educated in the Boston public schools, the Round Hill School, at Harvard, and the Harvard Medical School where he became a medical demonstrator, and later succeeded to his father's large practice. He was elected mayor on December 9, 1867, on the Democratic ticket.

He was not a good judge of human nature, knew little of the proper method of government, and therefore was not much of a success as a mayor. While he was in office, Atlantic Avenue was laid out along the lines of the Barricado, which connected the North Battery with the South, Broadway in South Boston was extended, Federal Street was widened, the East Boston ferries were taken over by the city and Dorchester was added to the city. During his term, the power to lay out streets was taken from the Board of Aldermen and given to the Street Commissioners.

He was the author of "A Topographical and Historical Description of Boston," and he edited the Massachusetts Colony records and the New Plymouth Colony records. He held many degrees, was a member of many historical societies, and a member and secretary of the Board of Overseers of Harvard.